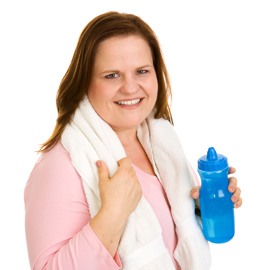 Is food the first thing you think of when it comes to diet and weight loss? While what you choose to eat most certainly plays a role in the success of any weight loss program, there is plenty of evidence to show that your diet is only part of the equation when it comes to successful weight loss. Exercise, stress management, the amount of sleep that you get, even hormone levels all play a role in your ability to achieve a weight loss goal and manage your weight.

Recently, researchers have found that there is a wide body of evidence that proper hydration habits may play a larger role in supporting a healthy weight than previously imagined.

You’ve probably heard before that you want to drink 8 large glasses of water per day. This is a rough estimate that should help you drink about 64 ounces of water daily. The problem is that most Americans are barely drinking half of that, and many are not actually getting any of their hydration from water at all, but instead are turning to juices and sodas that are high in sugar and sometimes caffeine.

A recent study looked at data from 9,500 adults who were enrolled in the National Health and Nutrition Examination survey (NHANES). They found that about 33{3a67f89bac1171c18e820b20ccfae70caa2d827bbb8a608d0d78300311666665} of adults in the study were not properly hydrated. Interestingly enough, this same population had on average higher BMIs than people in the study who were ideally hydrated.

While this study shows just a representative sample, the percentage of those found to be obese was in line with estimates of the general population, suggesting that dehydration may be a larger issue among obese and overweight populations than originally anticipated.

There are several potential reasons for these findings. The first is that individuals who have more body weight, so those who are obese or overweight, actually require more water to be properly hydrated than will someone at a lesser body weight. This makes the threshold of hydration a bit more difficult to reach. However, it is also found that many people who are overweight or obese are opting for beverages other than water, and are in general not drinking enough fluids. Other bodies of research indicate that drinking a glass of water prior to eating can actually reduce the amount of calories consumed, which supports weight loss.

If you are worried that you aren’t drinking enough water, consider finding ways to make staying hydrated easier. Carry a bottle of water with you everywhere and make a point to refill it so many times in the course of a day. When eating out, order water instead of soda. Every little bit of water can help you stay hydrated, and may even support your weight loss goals.